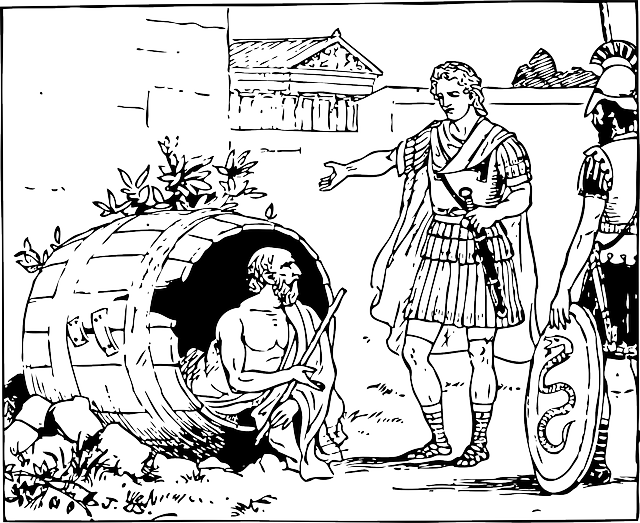 Fourth century Greek philosopher Diogenes once said “it is solved by walking” (“solvitur ambulando”).  It was his response to the question of whether motion is real.  He got up and walked.  Diogenes sounds like my kind of man; well, apart from the living in a barrel.  The words have since come to mean that the answer to a problem can usually be found by a practical experiment.  But I like to interpret them more literally because I find them to be true.  Walking has solved so many things for me, both great and small: from chronic ill-health to the day’s dinner menu.  Let me tell you about the latest example.

I’m in a cafe in Hay-on-Wye with my brain ping-ponging back and forth between two irritating issues.  One concerns a mentor telling me that he’s not prepared to perform a task that I thought was part of our paid agreement.  The other concerns a lack of accommodation on my next walking adventure.  However hard I cudgel my brain, I’m not making any progress with either issue.  My iPad runs out of juice, and puts an end to my mental misery.  Time to scale the six kilometres back up to Hay Bluff car park.

As I walk, I become captivated both by the rhythm of my steps and the greenness and grandeur of the landscape.  The irritating issues drift away.  When they reappear, they’re redressed.  Not only are they wearing different garb, they’re resolved as well.  I don’t want my mentor performing that task.  Not because I’m pissed off with him, but because I’d rather commission a fresh pair of eyes.  That will be more valuable.  As for the lack of accommodation, one of my useful questions pops into my head:

What did I do the last time this happened?

That unleashes a load of options that hadn’t even occurred to me while cudgelling in the cafe.

So, you see, walking does solve it – whatever it might be.  And it’s a repeating phenomenon, at least for me.  Read more in the three free chapters of my forthcoming book.