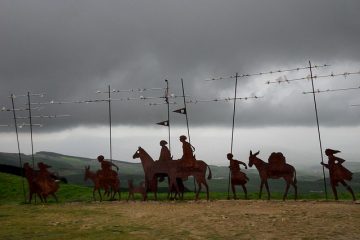 ‘You’re doing what?’, says my brother.

‘Walking from London to Santiago.’

‘Because I want to go on pilgrimage, rather than walk a pilgrim trail.  That entails closing my front door behind me.’

‘How long will it take?’

‘Can I have a list of where you’ll be staying?’

‘Because I don’t know where I’ll be staying.’

Such is my family farewell when I set off on my 2,075 km pilgrimage in March 2016.  I walk from London to Dover, catch a ferry to St Malo, walk to Mont Saint Michel, and then to Irun to the Camino del Norte.

For four weeks, I am the first and only pilgrim on the march in France.  Then I meet a French couple who will be my companions  – on and off – to Santiago.  Had I not met them, I would never have made it.  They help me across stepping stones that would have floored me.

As the season advances, numbers increase.  More French couples join us on pilgrimage.  Soon my schoolgirl French has graduated, and I’m surrounded by French friends who greet me by the French version of my name (Hélène).

France gives way to Spain, and our pilgrimage becomes more international.  We’re joined by pilgrims from South America, Canada, and Australia.  We have a near-no-room-at-the-inn moment in San Sebastián when we coincide with a Bruce Springsteen concert, but persistence and Airbnb rescue us.

After 99 days of walking, six days of sick leave, and three of rest, I arrive in Santiago in full summer and full of memories.  The happy times I spent with other pilgrims are indelible.  Even more touching though are the memories of the kindnesses I received en route.  The French couples who took me into their home at short notice, the retired pastry chef who made me a gluten-free tarta de Santiago, the elderly woman who tottered across a field to ask me if I needed food, water, a shower, the toilet.

Pilgrimage is whole and holy

These are the experiences I cannot explain to my brother.  They only make sense in the context of the Camino, prompted by the symbolism of the scallop shell on my backpack.  He was right about one thing though.  Walking the Camino isn’t a holiday; it’s an exquisite series of holy days.  And ‘holy’ comes from the same root as ‘whole’ – which is pretty much how I feel as I walk into Santiago. 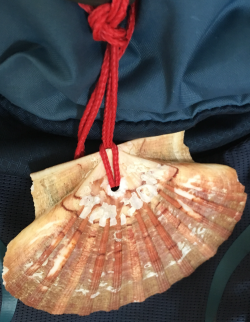